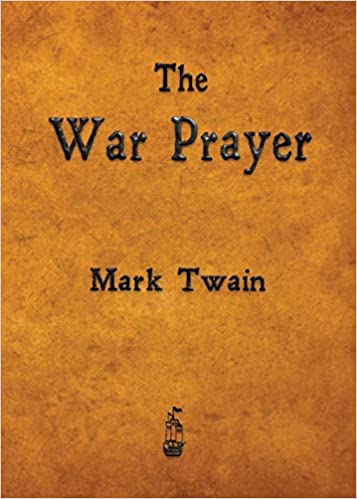 Mark Twain also referred to as Samuel Clemens is the author of “The war prayer”. The story “The war prayer” talks of a small town that prays for soldiers’ victory alginates their foes. A messenger who comes from God comes to reveal to the people of the town that they are brutal and selfish which is in favor of their wishes (“The War Prayer”).

He declares that the prayer made that the soldiers will have to “crush the enemies”, although signifying that victory to them wishes for bloody deaths and violence for those who oppose. The Congregation, Messenger “an aged Man” explains to the people that he was there to talk aloud on the second part of the prayers for the conquest. This is the part that they had indirectly wished for and not allowed for themselves actually the payer for the devastation of their foes. What comes after this is a gruesome depiction n full of hardship imposed on the war-torn nation-states by their captors. After all, the stranger “messenger” is finally ignored by the congregation, and they opt to settle on their own objectives towards the prayers.

To start with, “The War Prayer” deeply, Mark Twain’s statement on hidden antiwar sentiment is highly felt. In this case, the influence of other countries, imperialism, and its consequences as one of the American problems by use of the military force is highly expressed by Mark Twain. Ironically, the church is the place used for peace prayers previously, but later some meeting is held to plan for the destruction of the enemy hence pronouncing war. Surprisingly enough, this story never made up for the high popularity list. Indeed, the patriotic interpretations on America being held great above most of the period as the country hence could differentiate some of the serious views which Twain talks about “The War Prayer”.

Mark Twain on “The War Prayer” redirects about conditions and time of the Philippine American War. In his work, Mark Twain put the priest alongside the stranger unsuspectingly main to the reader. The story surprises with high spirit about the patriotic appearance of the American best. Patriotism festivities performed in the town by the parade and fireworks by victorious and joyous mood. Mark Twain discusses this in a positive perspective in order to direct the reader in a positive direction so that the reader may stay positive than taking it negatively, hence a more serious turn. Therefore, from the reading Twain is seen to disguise the trues aspect of the story through the creation of some false sense to secure the comfort of the story (Twain). Thus, patriotism continues to church just from the streets where the “prayer” starts.

More so, the prayer’s tone was set just from the beginning whereby everything starts by “God the all terrible”. The prayer went ahead with the purpose of blessing the soldiers as they were heading for battle hence to stay active and invincible. The primary objective of the prayer is to guide them and assist them to win the enemies. At this point, the stranger moves ahead to the podium and the story takes an entirely different direction. The stranger disrupts the priest by tapping his solder. Suddenly the payer tops and the priest is given a chance to take over by the priest. Actually, the ease on how the stranger takes over the entire scenario appears to recommend the risky reputation of what he has to say. The congregation gets mixed up and unusually views the stranger due to the interruption and negative statements that do not favor them as made by the stranger.

As he begins, the stranger asks, “Is it, one payer? “One person answered “no it is two” while the other one answered, “not”. This indicates that every side is in prayer for victory over the enemy which are against one another (Fishkin and Tatsumi). Indeed, who is the right party to receive the prayer for rooting the battle? Mark Twain expresses that no winner from the war it’s only the aftermath and Bloody carnage. The stranger, therefore, portrays the picture of the battle in a vivid description which he showed upon the prayer he made. He ends the prayer out and silences for the result with the gathering, and then states “Yes have prayed for it; if yes still wish for it, talk! The Most-High waits messenger waits”. This states that, if you are in need of it just move forward and pray (Twain). Therefore Mark Twain can be said to have planted the war effect seed into the mind of the reader.

In conclusion, “The War Prayer” till today rings on the war today even though was written over a century ago. However, at some point may not receive the desired attention as required since it is built of a provocative landscape of as the story. Indeed, today its obvious un-American being anti-patriotic and anti-war. This indicates that the story would fall beneath examination and not met with the best purposes. Unlike those days so many things have changed according to the perception of the various states more so the American. Therefore giving a different understanding if “The war prayer” was to be made in the current world. More so in patriotic and religious favor. The best phenomena that one would think of is a question if this story could be an essential aspect of American History as Tom Sawyer, how would American views different as hence a question value pondering.